Fishfinders today are increasingly powerful and sophisticated devices that make it much easier to fish, in salt or freshwater. However, fishfinders can vary widely in their capabilities. To get the best performance for your money, here are some of the important factors to consider.

Most modern fishfinders generate pulses in at least two frequencies to give you a better range of images. How well this works is also dependent on the angle of the cone of transmission, which could be anywhere between 9 and 60 degrees, or more. Higher frequencies like 200 kHz tend to work better in shallower water, while low frequency, longer-wave pulses such as 50 kHz are for deeper water. Frequencies of 455 and 800 kHz are available in more expensive models. The higher the frequency, the more pulses that are being sent, and the greater the detail you get. With dual frequencies, you can have two frequencies on the same signal cone and switch between them for more general views or narrower, more detailed images.

The greater the power output, the deeper your readings can go and the faster they can be rendered on your display. Lower power means low kHz pulses, so you may be able to get by with lower wattage if you fish shallower waters. In general, at 50 kHz you can see up to 400 feet for every 100 watts; but at short waves like 200 kHz, you will only see another 100 feet for every 100 watts of power.

You can still see shapes at 240×160 pixels, but you won’t see much detail. Screen sizes can also vary widely. So essentially you want the largest screen with the best resolution you can afford, because it will allow you to see more, and read text or numbers more easily. Modern fishfinder screens show images in a wide variety of color variations. Monochromatic screens (such as black and white) are still available; they’re cheaper and work perfectly well.

A combination of side imaging (SI) and down imaging (DI) will show you the widest area around and beneath your boat. GPS and charting/mapping will allow you to set waypoints at favorite spots so you can find them again. Other available features include the ability to upload/download data files, plot trips, Wi-Fi connection, split-screen views, and the ability to install upgrades.

Here are the highest rated fishfinders at 3 different price points: 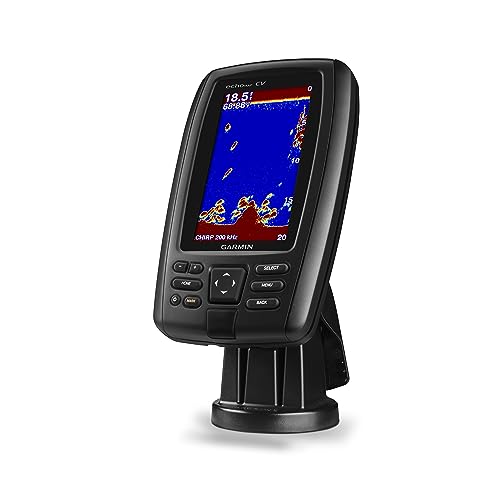 Having produced many good fishfinders, Garmin’s latest offering is the 43cv. The CV series are a more affordable line of fishfinders that nevertheless have many of the great features of more expensive models. The 43cv features a 4.3″, 480×272 pixel color screen, and stands only 7″ tall when mounted. But in that compact package you get sharp images and fast 500 watt GPS charting. There are 17,000 built in maps for US or Canadian lakes, and a combination of traditional CHIRP sonar and Garmin’s new ClearVu scanning sonar operating at up to 800 kHz. This allows you to scan saltwater depths up to 1,100 feet, or 2,300 in freshwater. You have the ability to create your own bottom contour maps and save and play back up to 5,000 different waypoints or 100 different routes.

It’s smallish, but also very portable. It comes with a quick-release mount so you can simply unplug the 43cv and put in your pocket when you leave the boat. It’s easy to install, easy to use, and for a low price packs an incredible range of features, such as water temperature graphs, tide tables, and a dual-beam, dual-frequency transducer. But it operates at only 5 watts so you won’t drain your marine battery. The 43cv is also easy to upgrade, with an empty SD card slot and many available add-ons. If you’re on a limited budget and can live with the smaller screen, the echoMap 43cv is definitely a great choice.

The Humminbird Helix 7 G2 is innovative inside and out, with bold styling, easy-to-follow menus, and simple installation. The SI provides impressive side views of 86-degrees up to 240 feet away. DI angles are adjustable with three easy settings of Narrow, Medium, or Wide. The out-of-box depth isn’t impressive, but an optional deep water transducer can extend it to 2,500 feet. It comes with a variety of nice features like and coastal charting, Fish Alarm, Sonar Recording, Screen Snapshot, and more. You can store up to 50 different tracks at 20,000 points each. The Helix 7 G2 is basically an upgrade of previous Helix 7 fishfinders, but you get a lot more at only a modest hike in price. Considering how much the CHIRP G2 can do, that’s a great value. 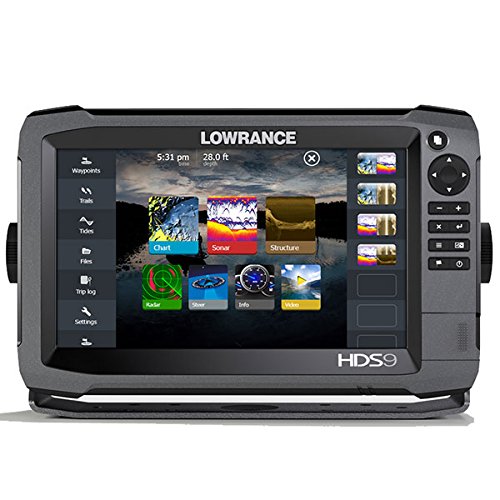 The HDS 9 series comes with the high-def sonar images on a 9″, 800×480 LCD screen with backlighting on both the display and keyboard. Images are photo-quality in either 2D or 3D. Screen functions are customizable, including background image. It has large menu icons and true touch screen capability for ease of use that’s even smoother than its predecessors. The display layout is similar to the Gen2 models, but now has scrolling, sliding side menus. This is almost luxurious compared to cheaper, smaller models, but the Gen3’s real strength is in the upgraded technology. The HDS-9 Gen3 sonar transducer operates at 83/200 kHz and has DownScan allowing depths of up to 750 feet, and SideScan coverage of over 600 feet in diameter. The StructureScan feature offers 455/800 kHz frequencies for realistic imaging at up to 300 feet in depth.

It processes signals and images faster than ever. The software supports 36 languages and it has two different SD slots to support options, including 32 GB of memory. The HDS 9 Gen3 is more efficient at sending, receiving, and processing sonar signals. It has integrated Wi-Fi so you can go online straight from the device to find add-ons like Lowrance’s GoFree app, extensive maps, plus upload logs, make personalized maps, and interact with Lowrance’s support community on the Social Map. It does so much, so well, and provides so many options, that you may find it ahead of the rest for years to come.